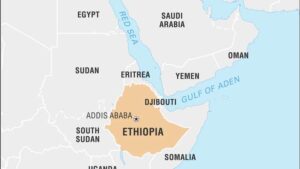 Is one of the world’s oldest countries, its territorial extent having varied over the millennia of its existence. … Ethiopia became prominent in modern world affairs first in 1896, when it defeated colonial Italy in the Battle of Adwa, and again in 1935–36, when it was invaded and occupied by fascist Italy.

Ethiopia is famous for being the place where the coffee bean originated. It is also known for its gold medalists and its rock-hewn churches. Ethiopia is the top honey and coffee producer in Africa and has the largest livestock population in Africa.

Unlike other African nations, Ethiopia has a long history of 3,000 years. Its origin traces back to the era King Solomon era. Queen Sheba had a son with King Solomon and the son, Menelik I, became the first emperor of Ethiopia.

Sheba was a nation in South Arabia but most of its residents moved to Northern Ethiopia by crossing the Red Sea. They used the name Sheba after their moving, which is the reason that Ethiopian historians insisted that Queen Sheba took a journey from Ethiopia to Jerusalem. Even though their claim does not have a proof, the Constitution of Ethiopia took it as a fact, confirming that Ethiopian dynasty had lasted from Menelik I to Haile Selassie I. This idea is the basis of the unity of Ethiopia.

The immigrants from South Arabia established a strong empire, planting a high cultural level in Ethiopia.
This empire was called “the Kingdom of Aksum” because its center was Aksum city.

The kingdom of Aksum was once very prosperous, covering South Arabia and even reaching Mecca.
They were the only nation in Africa that used their own characters, which is still used today.
Even though the kingdom of Aksum declined since the rise of Islam, losing their desert area to Islam , Christian culture and regulations from the kingdom of Aksum still exists in high lands.

A Close Tie Between Korea and Ethiopia- An Unforgettable Kindness

When the Korean peninsula faced the threat of Communist control at the outset of the Korean War, Emperor Haile Selassie I of Ethiopia (1892-1975) decided to enter the war, saying, ”Let us help South Korea keep peace and liberty, and defeat the North Korean army”. Ethiopia sent 6,037 soldiers (3,518 combatants and 2,519 peacekeepers), who were formerly known as the 1st Division Imperial Bodyguard

‘Fought 253 times, Won 253 times’ The quote “fought 253 times, won 253 times” represents the success that the Kagnew Battalions from Ethiopia had achieved in battle. Emperor Haile Selassie I christened his troops “Kagnew”, which meant both “to establish peace among chaos” and “first round knockout”. Before sending them to Korea, he told them, “you, soldiers, are going there in order to secure world peace.” Aptly named, the Ethiopian soldiers distinguished themselves in war, fighting against the North Korean army and Chinese army, and successfully defending South Korea.

They also battled the elements, fighting for the first time in cold weather. They fought in 253 battles, winning all 253, including the famous battles at Mt. Juckeun, Sanyang-Ri, Kangwon-Do, Moondoong-Ri in Punch Bowl, Geumhwa, and Chulwon (the “Iron Triangle”). They never retreated and fought so 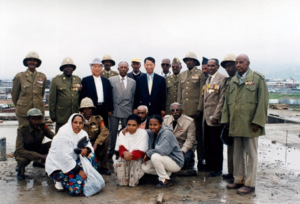 valiantly that no one was able to take back the areas that they had captured.

One honorable thing about the Ethiopians troops was that there were no prisoners of war. There were no soldiers that were used in an exchange of prisoners. However, there were many sacrifices- 122 soldiers were killed in battle, and 536 soldiers were wounded. Since the Ethiopian soldiers were placed in the front lines in August 1951, three successive battalions were active in the war. They fought alongside the 7thInfantry Division (United States) until 1953, the year of the ceasefire.
The number of Ethiopian soldiers who participated in the war was 3,518.